Jude 1:9 But Michael the archangel, when he disputed with the devil and argued about the body of Moses, did not dare pronounce against him a railing judgment, but said, "The Lord rebuke you."

9. Michael, the archangel--Nowhere in Scripture is the plural used, "archangels"; but only ONE, "archangel." The only other passage in the New Testament where it occurs, is 1Th 4:16, where Christ is distinguished from the archangel, with whose voice He shall descend to raise the dead; they therefore err who confound Christ with Michael. The name means, Who is like God? In Da 10:13 he is called "One ('the first,' Margin) of the chief princes." He is the champion angel of Israel. In Re 12:7 the conflict between Michael and Satan is again alluded to.
about the body of Moses--his literal body. Satan, as having the power of death, opposed the raising of it again, on the ground of Moses' sin at Meribah, and his murder of the Egyptian. That Moses' body was raised, appears from his presence with Elijah and Jesus (who were in the body) at the Transfiguration: the sample and earnest of the coming resurrection kingdom, to be ushered in by Michael's standing up for God's people. Thus in each dispensation a sample and pledge of the future resurrection was given: Enoch in the patriarchal dispensation, Moses in the Levitical, Elijah in the prophetical. It is noteworthy that the same rebuke is recorded here as was used by the Angel of the Lord, or Jehovah the Second Person, in pleading for Joshua, the representative of the Jewish Church, against Satan, in Zec 3:2; whence some have thought that also here "the body of Moses" means the Jewish Church accused by Satan, before God, for its filthiness, on which ground he demands that divine justice should take its course against Israel, but is rebuked by the Lord who has "chosen Jerusalem": thus, as "the body of Christ" is the Christian Church, so "the body of Moses" is the Jewish Church. But the literal body is evidently here meant (though, secondarily, the Jewish Church is typified by Moses' body, as it was there represented by Joshua the high priest); and Michael, whose connection seems to be so close with Jehovah-Messiah on the one hand, and with Israel on the other, naturally uses the same language as his Lord. As Satan (adversary in court) or the devil (accuser) accuses alike the Church collectively and "the brethren" individually, so Christ pleads for us as our Advocate. Israel's, and all believers' full justification, and the accuser's being rebuked finally, is yet future. JOSEPHUS [Antiquities,4.8], states that God hid Moses' body, lest, if it had been exposed to view, it would have been made an idol of. Jude, in this account, either adopts it from the apocryphal "assumption of Moses" (as ORIGEN [Concerning Principalities, 3.2] thinks), or else from the ancient tradition on which that work was founded. Jude, as inspired, could distinguish how much of the tradition was true, how much false. We have no such means of distinguishing, and therefore can be sure of no tradition, save that which is in the written word.
durst not--from reverence for Satan's former dignity (Jude 8).
railing accusation--Greek, "judgment of blasphemy," or evil-speaking. Peter said, Angels do not, in order to avenge themselves, rail at dignities, though ungodly, when they have to contend with them: Jude says that the archangel Michael himself did not rail even at the time when he fought with the devil, the prince of evil spirits--not from fear of him, but from reverence of God, whose delegated power in this world Satan once had, and even in some degree still has. From the word "disputed," or debated in controversy, it is plain it was a judicial contest.

The Book of Jude

Jude 1:3-4 - Beloved, when I gave all diligence to write unto you of the common salvation, it was needful for me to write unto you, and exhort [you] that ye should earnestly contend for the faith which was once delivered unto the saints. For there are certain men crept in unawares, who were before of old ordained to this condemnation, ungodly men, turning the grace of our God into lasciviousness, and denying the only Lord God, and our Lord Jesus Christ.

Jude 1:24 - Now unto him that is able to keep you from falling, and to present [you] faultless before the presence of his glory with exceeding joy,

Jude in The New Testament - A Brief Overview 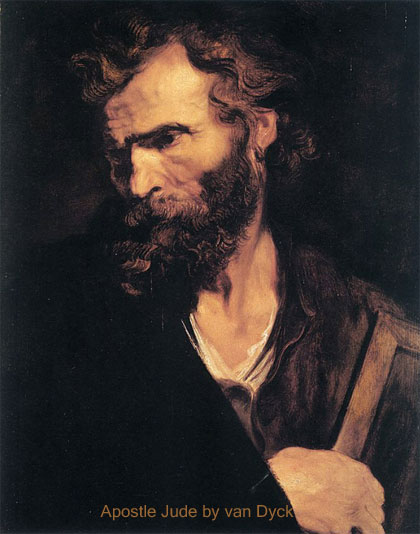 Introduction to The Book of Jude

Brief Summary. The apostle Jude denounces apostasy and corruption, and he contends for the faith that is once and for all delivered unto the saints.

Summary of The Book of Jude

Contents. Jude addresses the false teachers that were leading the church, he mentions the last days and he could have been addressing all false teachers throughout all ages. Some of their attributes were: ungodliness, turning the grace of God into lasciviousness, they denied Christ, they were fornicators, they despised authority, they defiled the flesh, they corrupt themselves like brute beasts, they were shepherds who only feed themselves, clouds without water, trees without fruit, Stormy waves foaming out their own shame, wandering stars in outer darkness, murmerers, complainers, boasters, lustful mockers, self seeking, division causers. Jude also encourages believers to: Build themselves up, pray in the Holy Spirit, keep themselves in the love of God, look for his mercy, have compassion, save certain ones with fear,  and he ends with praise to God who will present the believer spotless to His presence.

Author. The writer identifies himself as "Jude, a servant of Jesus Christ and brother of James" (1:1). Jude was probably the "Judas" named in John 14:22 as one of his apostles. He is commonly thought to have been the brother of Jesus as well. He was formerly an unbeliever (John 7:5), yet later he appeared in the upper room with his mother and the other disciples after the ascension of Jesus (Acts 1:14). 1 Corinthians 9:5 would seem to imply that he was married.

Place of Writing. There is nothing in the epistle to indicate either its place of writing or the area to which it was addressed. The general phrase, "to them that are sanctified by God the Father and preserved in Jesus Christ, and called," would seem to refer to all Christians; yet, examining his message to the false teachers he could have been addressing all false teachers rather than a certain group.

Outline of the Book of Jude