The Book of 1 Peter

1 Peter 1:7-9 - That the trial of your faith, being much more precious than of gold that perisheth, though it be tried with fire, might be found unto praise and honour and glory at the appearing of Jesus Christ: Whom having not seen, ye love; in whom, though now ye see [him] not, yet believing, ye rejoice with joy unspeakable and full of glory: Receiving the end of your faith, [even] the salvation of [your] souls.

1 Peter 4:12-16 - Beloved, think it not strange concerning the fiery trial which is to try you, as though some strange thing happened unto you: But rejoice, inasmuch as ye are partakers of Christ's sufferings; that, when his glory shall be revealed, ye may be glad also with exceeding joy.  If ye be reproached for the name of Christ, happy [are ye]; for the spirit of glory and of God resteth upon you: on their part he is evil spoken of, but on your part he is glorified. But let none of you suffer as a murderer, or [as] a thief, or [as] an evildoer, or as a busybody in other men's matters. Yet if [any man suffer] as a Christian, let him not be ashamed; but let him glorify God on this behalf.

1 Peter in The New Testament - A Brief Overview 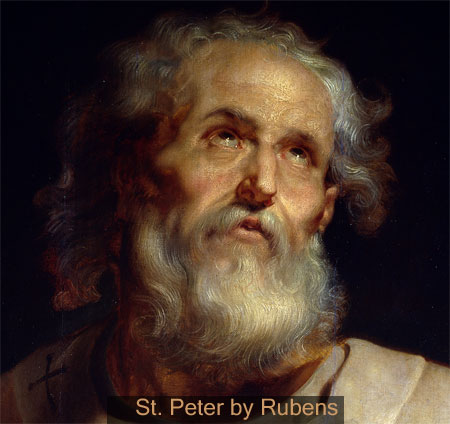 Icon of St. James the Just

Introduction to The Book of 1 Peter

Brief Summary. Peter wrote his epistle to comfort and strengthen the Christians that were under severe persecution. He speaks about the glory of their inheritance in heaven, which is reserved for those who are suffering for the sake of Christ. He also wrote his epistle to reinforce all of their instruction regarding living the Christian life. Peter exhorts every Christian to abstain from worldly pleasures and serve the living God. He encourages believers to be ready to give a defense of their Christianity, and to display love toward one another. He also encourages them to be strong in their faith and to remove any doubts. He assures them that they were not following "cunningly devised fables" but had received the truths concerning Lord Jesus Christ, to whose glory the apostle Peter himself have been an eyewitness. (Matthew 17)

Summary of The Book of 1 Peter

Author. Peter, the fisherman from Galilee is the author of the book of 1 Peter. The writer refers to himself as "Peter" in 1 Peter 1:1. Scholars agree on authorship as well as the early church leaders like Polycarp, Irenaeus, Clement of Alexandria, Tertullian and Origen who all quote from the book naming Peter as the author. When comparing the words and character of Peter the work is clearly his style.

Date. The book of 1 Peter was written during a great persecution happening to the church, because Peter mentions the "fiery trial" which the Christians were suffering under. Most likely it was the persecution under the Emperor Nero in 64 AD where Peter Himself was martyred. Most likely the book of 1 Peter was written in 63 AD just before his death.

Place of Writing. The epistle of 1 Peter was written from Rome. The apostle Peter was suffering the same persecution as all Christians in the Roman Empire, and especially in Rome. When Peter mentions "Babylon" as a place he was writing from, it was most likely a euphemism for Rome. Peter may not have wished to reveal that he was in Rome. It also would not have been wise for Peter or any Christian to speak of Rome in any way other than a great empire, especially during a time of great persecution. Any Christian would've understood Babylon is a symbol for Rome. Also the fact that Mark (1 Peter 5:13) and Timothy (2 Timothy 4:11) were with him at the time of this writing, indicates that the book was written from Rome.

Outline of the Book of 1 Peter